There are three main types of shapes : polygon-based, record-based and user-defined.

The geometry and style of all node shapes are affected by the node attributes fixedsize, fontname, fontsize, height, label, style and width.

The possible polygon-based shapes are displayed below.

As the figures suggest, the shapes rect and rectangle are synonyms for box, and none is a synonym for plaintext. The shape plain is similar to these two, except that it also enforces width=0 height=0 margin=0, which guarantees that the actual size of the node is entirely determined by the label. This is useful, for example, when using HTML-like labels. Also, unlike the rest, we have shown these three, as well as underline, without style=filled to indicate the normal use. If fill were turned on, the label text would appear in a filled rectangle.

The geometries of polygon-based shapes are also affected by the node attributes regular, peripheries and orientation. If shape="polygon", the attributes sides, skew and distortion are also used. If unset, they default to 4, 0.0 and 0.0, respectively. The point shape is special in that it is only affected by the peripheries, width and height attributes.

Note that the label of the yellow node, with fixedsize=true, overlaps the other node, where there is sufficient space for the gray node with fixedsize=shape.

NOTE: Please see the note about record-based nodes. Also note that there are problems using non-trivial edges (edges with ports or labels) between adjacent nodes on the same rank if one or both nodes has a record shape.

These are specified by shape values of "record" and "Mrecord". The structure of a record-based node is determined by its label, which has the following schema:

Braces, vertical bars and angle brackets must be escaped with a backslash character if you wish them to appear as a literal character. Spaces are interpreted as separators between tokens, so they must be escaped if you want spaces in the text.

The first string in fieldId assigns a portname to the field and can be combined with the node name to indicate where to attach an edge to the node. (See portPos.) The second string is used as the text for the field; it supports the usual escape sequences \n, \l and \r.

Visually, a record is a box, with fields represented by alternating rows of horizontal or vertical subboxes. The Mrecord shape is identical to a record shape, except that the outermost box has rounded corners. Flipping between horizontal and vertical layouts is done by nesting fields in braces "{...}". The top-level orientation in a record is horizontal. Thus, a record with label "A | B | C | D" will have 4 fields oriented left to right, while "{A | B | C | D}" will have them from top to bottom and "A | { B | C } | D" will have "B" over "C", with "A" to the left and "D" to the right of "B" and "C".

The initial orientation of a record node depends on the rankdir attribute. If this attribute is TB (the default) or BT, corresponding to vertical layouts, the top-level fields in a record are displayed horizontally. If, however, this attribute is LR or RL, corresponding to horizontal layouts, the top-level fields are displayed vertically.

As an example of a record node, the dot input:

If we add the line:

we get the layout:

If we change node struct1 to have shape Mrecord, it then looks like:

filled
This value indicates that the node's interior should be filled. The color used is the node's fillcolor or, if that's not defined, its color. For unfilled nodes, the interior of the node is transparent to whatever color is the current graph or cluster background color. Note that point shapes are always filled.

invisible
Setting this style causes the node not to be displayed at all. Note that the node is still used in laying out the graph.
diagonals
The diagonals style causes small chords to be drawn near the vertices of the node's polygon or, in case of circles and ellipses, two chords near the top and the bottom of the shape. The special node shapes Msquare, Mcircle, and Mdiamond are simply an ordinary square, circle and diamond with the diagonals style set.
rounded
The rounded style causes the polygonal corners to be smoothed. Note that this style also applies to record-based nodes. Indeed, the Mrecord shape is simply shorthand for setting this style. Also, prior to 26 April 2005, the rounded and filled styles were mutually exclusive.

As an example of rounding, dot uses the graph:

to produce the figure:

Additional styles may be available with a specific code generator.

NOTE: This feature is only available on versions of Graphviz that are newer than mid-November 2003. In particular, it is not part of release 1.10.

NOTE: For releases later than 9 September 2014, one can use shape=plain so that the size of the node is totally determined by the label. Otherwise, the node's margin, width and height values may cause the node to be larger, so that edges are clipped away from the label. In effect, shape=plain is shorthand for shape=none width=0 height=0 margin=0.

If the value of a label attribute (label for nodes, edges, clusters, and graphs, and the headlabel and taillabel attributes of an edge) is given as an HTML string, that is, delimited by <...> rather than "...", the label is interpreted as an HTML description. At their simplest, such labels can describe multiple lines of variously aligned text as provided by ordinary string labels. More generally, the label can specify a table similar to those provided by HTML, with different graphical attributes at each level.

As HTML strings are processed like HTML input, any use of the ", &, <, and > characters in literal text or in attribute values need to be replaced by the corresponding escape sequence. For example, if you want to use & in an href value, this should be represented as &amp;.

NOTE: The features and syntax supported by these labels are modeled on HTML. However, there are many aspects that are relevant to Graphviz labels that are not in HTML and, conversely, HTML allows various constructs which are meaningless in Graphviz. We will generally refer to these labels as "HTML labels" rather than the cumbersome "HTML-like labels" but the reader is warned that these are not really HTML. The grammar below describes precisely what Graphviz will accept.

Although HTML labels are not, strictly speaking, a shape, they can be viewed as a generalization of the record shapes described above. In particular, if a node has set its shape attribute to none or plaintext, the HTML label will be the node's shape. On the other hand, if the node has any other shape (except point), the HTML label will be embedded within the node the same way an ordinary label would be. Adding HTML labels to record-based shapes (record and Mrecord) is discouraged and may lead to unexpected behavior because of their conflicting label schemas and overlapping functionality.

The following is an abstract grammar for HTML labels. Terminals, corresponding to elements, are shown in bold font, and nonterminals in italics. Square brackets [ and ] enclose optional items. Vertical bars | separate alternatives. Note that, as in HTML, element and attribute names are case-insensitive. (cf. sections 3.2.1 and 3.2.2 of the HTML 4.01 specification).

All non-printing characters such as tabs or newlines are ignored. Above, a string is any collection of printable characters, including spaces. For tables, outside of the body of a <TD> element, whitespace characters are ignored, including spaces; within a <TD> element, spaces are preserved but all other white space characters are discarded. N.B. For technical reasons, if a table is wrapped in a font element such as <FONT> or <B>, any space immediately before or after this will cause a syntax error. For example, the label

HTML comments are allowed within an HTML string. They can occur anywhere provided that, if they contain part of an HTML element, they must contain the entire element.

As is obvious from the above description, the interpretation of white space characters is one place where HTML-like labels is very different from standard HTML. In HTML, any sequence of white space characters is collapsed to a single space, If the user does not want this to happen, the input must use non-breaking spaces &nbsp;. This makes sense in HTML, where text layout depends dynamically on the space available. In Graphviz, the layout is statically determined by the input, so it is reasonable to treat ordinary space characters as non-breaking. In addition, ignoring tabs and newlines allows the input text to be formatted for easier reading.

Each of the HTML elements has a set of optional attributes. Attribute values must appear in double quotes.

The contents of a cell are normally aligned as a block. In particular, lines of text are first aligned as a text block based on the width of the widest line and the corresponding <BR> elements. Then, the entire text block is aligned within a cell. If, however, the cell's ALIGN value is TEXT, and the cell contains lines of text, then the lines are justified using the entire available width of the cell. If the cell does not contain text, then the contained image or table is centered.

There is some inheritance among the attributes. If a table specifies a CELLPADDING, CELLBORDER or BORDER value, this value is used by the table's cells unless overridden. If a cell or table specifies a BGCOLOR, this will be the background color for all of its descendents. Of course, if a background or fill color is specified for the graph object owning the label, this will be the original background for the label. The object's fontname, fontcolor and fontsize attributes are the default for drawing text. These can be overridden by using FONT to set new values. The new font values will hold until overridden by an enclosed FONT element. Finally, the pencolor or color of the graph object will be used as the border color.

If you want horizontal or vertical rules used uniformly within a table, consider using the COLUMNS or ROWS attributes rather than using many HR and VR elements.

Because of certain limitations in handling tables in a device-independent manner, when BORDER is 1 and both table and cell borders are on and CELLSPACING is less than 2, anomalies can arise in the output, such as gaps between sides of borders which should be abutting or even collinear. The user can usual get around this by increasing the border size or the spacing, or turning off the table border.

produces the HTML analogue of the record example above:

As usual, an HTML specification is more verbose.

On the other hand, HTML labels are much more general:

The sides attribute (version 2.37 and later) allows one to combine cells to form various non-convex shapes. For example, a tee-shaped node

There is a third type of node shape which is specified by the user. Typically, these shapes rely on the details of a concrete graphics format. At present, shapes can be described using PostScript, via a file or add-on library, for use in PostScript output, or shapes can be specified by a bitmap-image file for use with SVG or bitmap (jpeg, gif, etc.) output. More information can be found on the page How to create custom shapes.

One example of user-defined node shapes is provided by Mark Rison of CSR. These are the SDL shapes. These are available as PostScript functions whose use is described in External PostScript procedures. The necessary PostScript library file and sample use can be found in the contrib/sdlshapes directory in the release. Please note the COPYRIGHT AND PERMISSION NOTICE contained in the library file sdl.ps.

The table below gives the shape names and the corresponding node shapes: 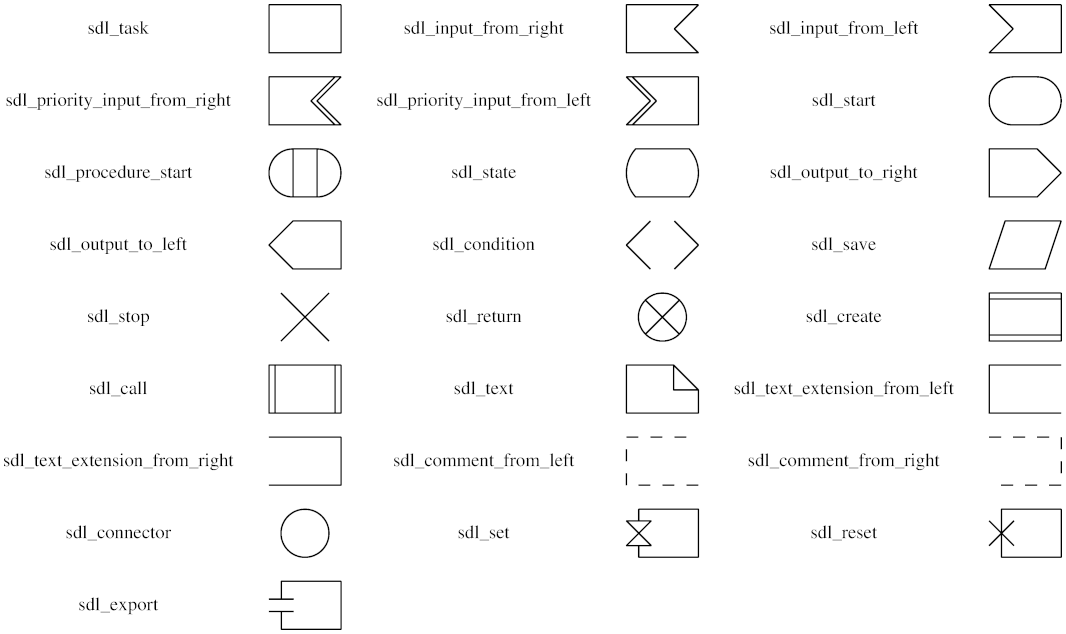